“That’s the most snow I’ve ever seen!” “How far north are we?” “We’ve been driving for a LONG time.” But it was well worth it as we turn up the road from Grand Marais and head into the Narnian wonderland that is the Gunflint Trail and to our final destination of Bearskin Lodge. 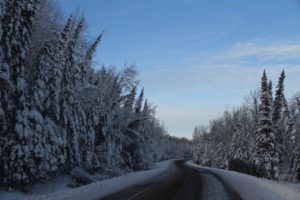 A mashup of twelve kids rallied together for a two-night stay at Bearskin as a result of two Anwatin skiers winning a Hoigaard’s Challenge drawing two years running. In 2014, Nooshilon Vang won and a year later, Doua Thao won the same trip! These were some seriously lucky kids. And a seriously lucky coach. The Hoigaard’s Challenge is a series of all four major Loppet events: the City of Lakes Loppet, the Salomon CITYTRAIL Loppet, the UCare Tri-Loppet and Surly Trail Loppet. Many Anwatin and other Junior Loppet athletes accomplish the participation goal of completing an event at each one. The trick? In order to win a trip to Bearskin Lodge, you have to win the whole series, OR, in our case, win the random drawing that happens at each year’s Hoigaard’s Challenge banquet. 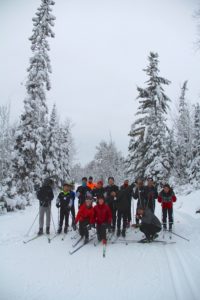 We all came together to spend Saturday and Sunday nights at Bearskin Lodge and do as much cross country skiing as we possibly could. We settled in just as the sun was starting to come down on Saturday late afternoon, so we quickly put on our skis and headed out on the lit loop, a fun and rolling little trail. Between being on our real skis for the first time this season, the deep, soft snow, and some waning sunlight, we were all a little wobbly but also fairly giddy from the excitement of being surrounding by snow-buried trees and perceived speediness that nighttime brings. We managed to sneak our way out to a wide ski trail called Summer Home Road that gave us lots of room to spread our skis and speed on down the trail by the light of the moon. After a while we headed back and whipped up some dinner, and relaxed for the evening.

It was decided that night that there was to be a challenge for the coming long day and following morning. Points could be earned by skiing kilometers, drinking water, eating a piece of fruit, and lastly, for every hour before 10 p.m. that you went to bed! I’m shocked to tell you that a few kids took us up on that last one. 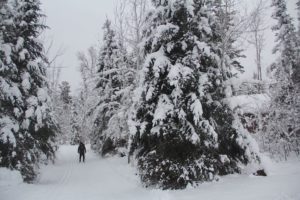 The skiing was spectacular! Bearskin Lodge received about 18 inches of snow within the last week, so the tall pine and birch trees were a beautiful sight, and a number of surrounding ski trails had been freshly groomed to guide us through the wooded hills. We classic skied in the morning and skate skied in the afternoon, with a break for some technique work, relays, lunch, and a little downtime and waxing. We spent most of our time on the main Summer Home Road trail that is wide and gradual in terrain, except for a thriller hill right at the beginning, and then branched out to the Beaver Dam trail, which was narrower and had a little steeper and windier terrain to play on. Our newcomer Kong-Meng was a champ and had great helpers to help him get the swing of things. Another new skier, Peter, was cruising around the Beaver Dam trail in no time and I’m certain I even caught him V2ing at one point after he told me he was pretty tired.

In the evening, we spent time in the hot tub, playing card games, eating dinner, then ventured into Sauna time when Coach Kevin showed the kids how saunas are meant to be taken, with lots of water thrown onto the rocks, and finally, some Bearskin Lodge specially homemade blueberry pie, and storytime by Anne Rykken, my favorite mother and chaperone for the weekend. She read “The Race of the Birkebeiners.” Then it was bedtime. 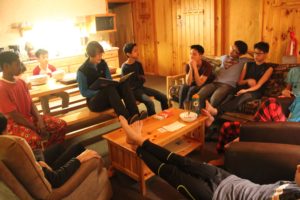 Monday morning we got up early so we could chow some raspberry pancakes, pack and clean up our rooms, and get out for more one ski before we had to hit the road. Some went out for a long ski, some skated – some classic skied (proud coach moment), some helped the newer skiers work on some technique pointers, some paved new tracks on the ungroomed trails, and some enjoyed the big hill a few more times. I had to stand still and listen to the absolute quiet for a few moments before I headed back to the van. I was fortunate to have a family that brought me up to the North Woods as a kid, and I was really thankful that Bearskin Lodge offered that same chance to some of the Anwatin and Patrick Henry kids. 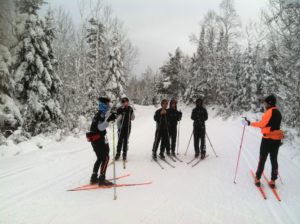 On that note, a huge thank you to Bearskin Lodge for providing such a wonderful experience, from the comfortable lodging accommodations to the freshly groomed ski trails in the morning, from the kind advice and friendliness of our hosts to the downright dreamy blueberry pies.

We had the good fortunate of running into the Nelson family, former Hoigaard’s Challenge winners who now come up as a family tradition with their two young kids.

Also we thank Emily Johnson for helping chaperone the trip and giving us some skiing pointers!

Headed back to the Twin Cities, we rewarded those who met the point challenge with a steaming cup of hot chocolate with green whipped cream on top at the Java Moose in Grand Marais. And about half hour later, nearly everyone was passed out asleep in the back of the van. 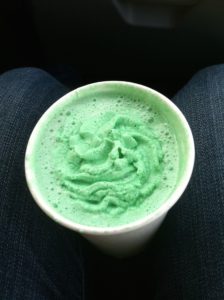 We are hoping for snow in the Twin Cities any day now, but we got an fulfilling rush of winter for a bit there and that should keep us happy, at least for a little while…