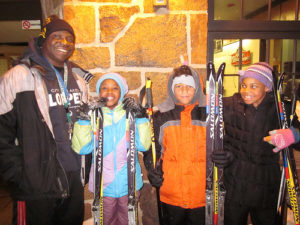 For the past four years, Fairview Park has been home to one of the only neighborhood ski teams in Minneapolis.  Made possible through the collaboration of Minnesota winters and the Loppet Foundation, the Farview Ski Team meets biweekly for practice in Theodore Wirth Park.

“I wasn’t sure how they were going to like it at first,” said Louis Oatis who has been supervising the youth in the program since the beginning.  Oatis meets the skies at Farview and then takes them to Wirth where they strap on their poles and ski freely on the hills into the wintry nights.

Youth from Farview Park have been involved in Loppet Foundation’s Adventure Program for four years.  Initially the team was formed to train for the City of Lakes Tri-Loppet, an event where the youth learned to canoe, mountain bike and trail run.  As the seasons changed, the Loppet Foundation talked with Louis about carrying the summer program through the winter with cross country skiing.  “I told them I knew a few kids that were not into basketball or football.  This was something new to try.”  From the beginning the program took off. 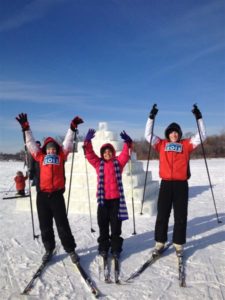 The team has been coached largely by Scott Kyser who has seen the athletes develop throughout the years.  “Scott knows the kids and the kids know him.  They love him,” said Oatis chuckling.  “He teaches them technique – how to go up and down the hills, and stop… They are really beginning to know the ins and outs of the sport.”

Even as temperatures dip near zero, the Farview Ski Team shows up ready to rock the trails.  “They keep coming back,” said Oatis.  “I think they feel unique about it.  Skiing is something not a lot of people can do.”  The Loppet Foundation provides team jackets Oatis distributes for practices and races.  “They know that it is a commitment to be on this team…  It’s great because for those that stick with it, they get the hang of skiing, they seem to enjoy it more.”

Babette Kamba said that she found out about the Fairview ski team through Minneapolis Parks and Rec winter program guide.  Although living closer to Harrison, Fairview was the only North Minneapolis park with a ski team so she brings her son to Wirth weekly to meet the team for practice.  “It is rare to have such positive winter experiences,” said Kamba.  “I want him to have these life long skills… We live close to Wirth and it is a way to be healthy in the winter.”

Oatis said several of the youth talk about skiing in high school.  The Loppet Foundation is hoping that by planting more ski teams in North Minneapolis schools and parks, this winter sport can be learned and embraced by more youth.  “It’s a way to be active in the winter,” said Oatis who has also learned to ski as a result of the program.  With these fresh coats of snow, the Farview Ski Team will keep skiing until spring.