The Loppet Foundation :: News & Stories :: In the Park: Eloise Butler 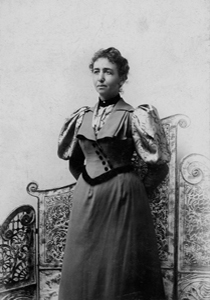 Eloise Butler was born in 1851 in Appleton, Maine and became a botany teacher. Upon moving to Minneapolis, Eloise frequently took students into the bogs of Glenwood park for lessons, known today as Theodore Wirth Park. After she and a group of other botany teachers petitioned to the Minneapolis Park Board in 1907 to create a natural botanical garden, three acres named the Wild Botanic Garden opened to preserve native flora as the city developed. It was the first public wildflower garden in the United States.

After many years of volunteer work in the garden and her retirement from teaching, Eloise was named the garden curator at the recommendation of the Minneapolis Women’s Club. In her time as curator, she moved plants from natural areas in Minneapolis and around Minnesota into the garden, collecting, preserving, and cataloguing wild plants as well as offering free botany classes. In 1927, the garden adopted the name Eloise Butler Wildflower Garden in her honor. Eloise died during one of her days at the garden at the age of 81, and in her memorial service included the words, “Every plant in her garden was her living child, upon whom she bestowed her devotion and care.”

1911: Eloise using a downed tree to navigate in the quaking bog where she would source plants. (3)

Martha Crone succeeded Eloise as garden curator, followed by Ken Avery who was the first to use controlled burns to manage the upland prairie. In the 1970s, the garden dealt with Dutch Elm Disease and drought, causing the garden to become sunnier and drier. Replacing trees and wildflowers has been ongoing since the 1970s. Following Ken, Cary George worked to remove invasive species, install trail signs, laminate maps, add wood station posts, and expand the garden further. Following Cary and starting in 2004, Susan Wilkins has been developing volunteer programs to battle invasive species, expanding educational opportunities in the garden, and planting native plants. She contributed to the development of the Garden’s first Management Plan in 2010.

Eloise Butler Wildflower Garden covers 15 acres of land. The garden hosts around 60,000 annual visitors in its woodland, wetland, and prairie areas, each fostering different plants and animals. It is home to over 600 plant species, and the garden provides habitat for over 130 resident and migratory bird species.  It also hosts public programs, activities, and youth and adult group tours.

Map of the Garden

All life is interconnected. We can nurture the health of our natural social communities through our beneficial actions rooted in this awareness.

The Eloise Butler Wildflower Garden and Bird Sanctuary showcases native plants and birds to inspire stewardship and appreciation of the natural world.

Minneapolis Parks and Recreation Board

Friends of the Wildflower