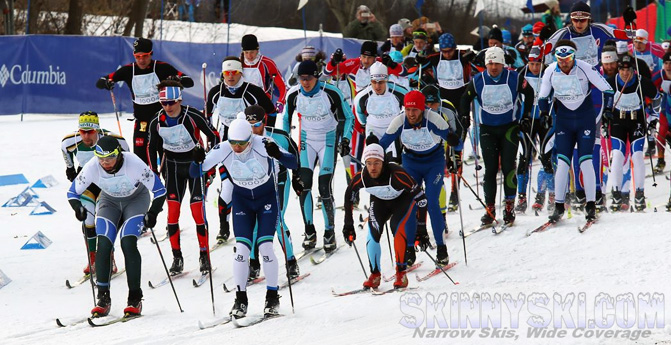 Blue skies and a crisp breeze greeted skiers at Theodore Wirth Park on Saturday morning of the City of Lakes Loppet.

The excitement and buzz built as the skiers toed the starting line at the Hoigaard’s Classical Marathon. Racers were competing for the overall win as well as for the AXCS National Masters Championship title for the 30- to 59-year-olds. 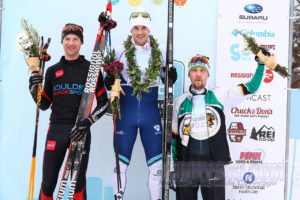 The race announcer counted down, “three, two, one — go!” And, with the loud bang of the cannon, the 226 skiers were off.

Conditions for the morning were great across the 6-kilometer course, despite the lack of natural snow. The hilly marathon route, which was 5 loops – or a total of 32 Kilometers – was packed with spectators.

After breaking a pole in the Finn Sisu Sprints the night before, Matt Liebsch was gunning to make up for lost time. He took off from the start, broke away from the men’s field and never looked back. He hammered up the hills, took advantage of the downhills and held his gap on the rest of the pack to take the win by over two minutes with a time of 1:14:05. Behind Liebsch was Chris Pappathopoulos, of Sun Prairie, Wisconsin, with a time of 1:16:09. In third was Krystof Kopal of Marquette, Michigan with a time of 1:17:17. 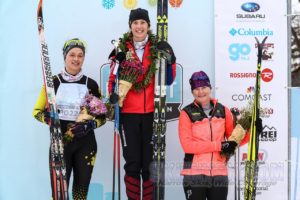 There was an impressive win in the women’s field by Felicia Gesior, from Marquette Michigan. Gesior, a 23-year-old, won by almost a seven minute margin with a time of 1:28:51. In second place was Canadian skier Isabella Howden of Barrie, Ontario, who crossed the finish line in 1:35:49. In third place was Kelly Skillicorn, of Winona, Minnesota, with a time of 1:36:20.

The Puoli Loppet Classic (or “short classic”), which took off right after the marathon race was the American Cross Country Skiers National Championship event for skiers age 60 and over. The shorter course was three 4.8-kilometer loops, a total distance of 14.4-Kilometers. 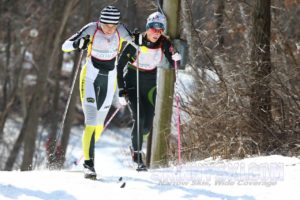 A first time Loppet skier commented after the race, “the condition of the tracks held up surprisingly well and when there weren’t a ton of leaves in the tracks, it was pretty fast!”

J.D. Downing of Bend, Oregon finished first with a time of 40:15. It was a close race for second and third place, but 13-year-old Victor Sparks, a Loppet TRAIL KIDS racer from Minneapolis, Minnesota, took the second step on the podium with a time of 41:17. In third place was John Gravlin, of Cheboygan, Michigan, with a time of 41:19. Gravlin also won the title of AXCS National Masters Champion for the M7 age group.

In the women’s field, Kate Ellis of Roseville, Minnesota, took the win, finishing with a time of 46:21 and claiming the title of AXCS National Masters Champion for the F7 racers. Right behind Ellis was Loppet Coach, Allie Rykken, finishing at 46:28. In third place, with a time of 51:31, was Rebecca Kolstad from Dayton, Minnesota.