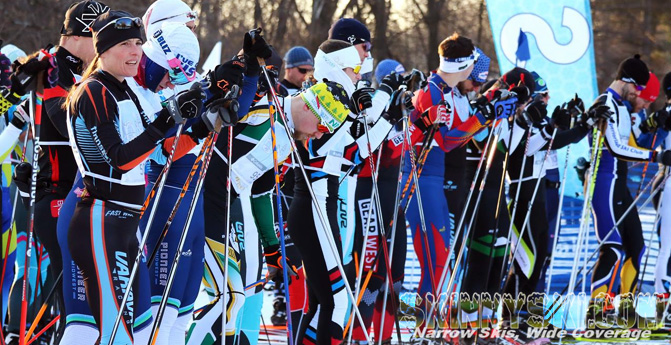 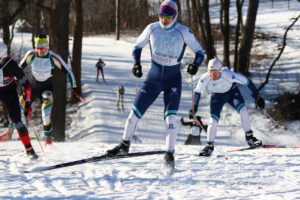 The Loppet trail maintenance crew worked hard in the early hours of Sunday to prepare the skate deck for the last day of races of the 2017 City of Lakes Loppet. Their efforts were greatly appreciated because the 5 lap, 30-Kilometer marathon course was fast!

A big crowd gathered again on Sunday to cheer on the 370 skiers as they took off with a cannon blast on the second day of racing at Theodore Wirth Park.

Matt Liebsch, who commented before the start that he was “feeling pretty tired” after the effort he put out in the classic marathon, hung with the lead pack for four laps before taking off and skiing away to claim his second first place finish of the weekend, sweeping both of the marathon titles. Liebsch crossed the finish line in 1:08:30. Behind Liebsch was Alex Reich, of Marine On Saint Croix, Minnesota, and Matt Weier, of Minneapolis, Minnesota. The two fought hard to the finish for second place. Reich just barely held off Weier to take the second spot on the podium with a time of 1:08:51.

In the women’s field Felicia Gesior came in first for the second day in a row, sweeping both of the women’s marathon titles with a finishing time of 1:19:32. Coming in just under a minute behind Geisor was last year’s skate marathon winner, Alice Flanders of Edina, Minnesota. In third place was Isabella Howden, who crossed the finish at 1:22:15.

The Puoli Loppet Skate took off just after the marathon wrapped up. The course was 14.4 Kilometers long. Skiers were racing for the overall title and for the AXCS National Masters Championship title for ages 30 and up. 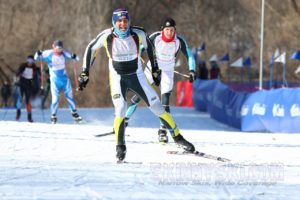 In the men’s field, two Loppet Nordic Racers went head-to-head for first and second. Loppet Head Coach, Piotr Bednarski, just barely broke away from John Munger, the executive director of the Loppet Foundation. Bednarski said after the race that he saw his opening on the last downhill section of the course and credited his win to fast skis and the extra weight he had on Munger, which gave him the speed he needed. Bednarski took first with a time of 34:18, and Munger was right behind him at 34:19. In third place was Andy Schakel of Lake Elmo, Minnesota, with a time of 34:21. Bednarski, Munger and Schackel all claimed the AXCS National Masters Championship titles in the M5, M4, and M3 age groups, respectively.

The first place woman was Jan Guenther, of Long Lake, Minnesota, who crossed the line in 36:51. Guenther took the title of F6 AXCS National Masters Champion in addition to her overall win. In second, with a time of 38:26 was Mary Beth Tuttle, of Pine Springs, Minnesota. Third place went to Ashley Herman of Duluth, Minnesota who finished at 39:55.

Overall, the skate racers were thrilled about the fast skiing conditions, fantastic number of spectators, and the volunteers who worked hard to rake corners, shovel and make sure the course was in amazing shape for both skate races.