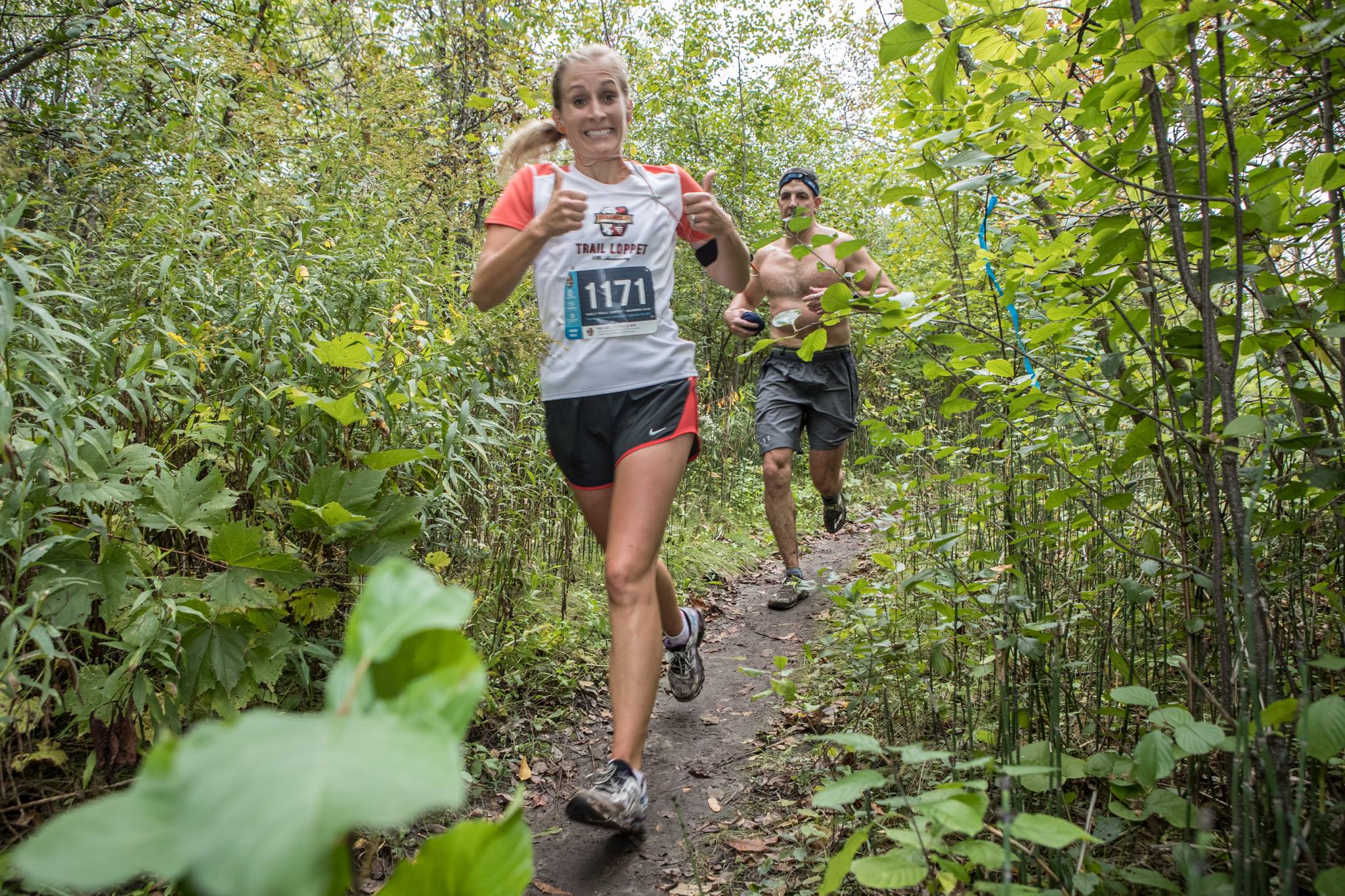 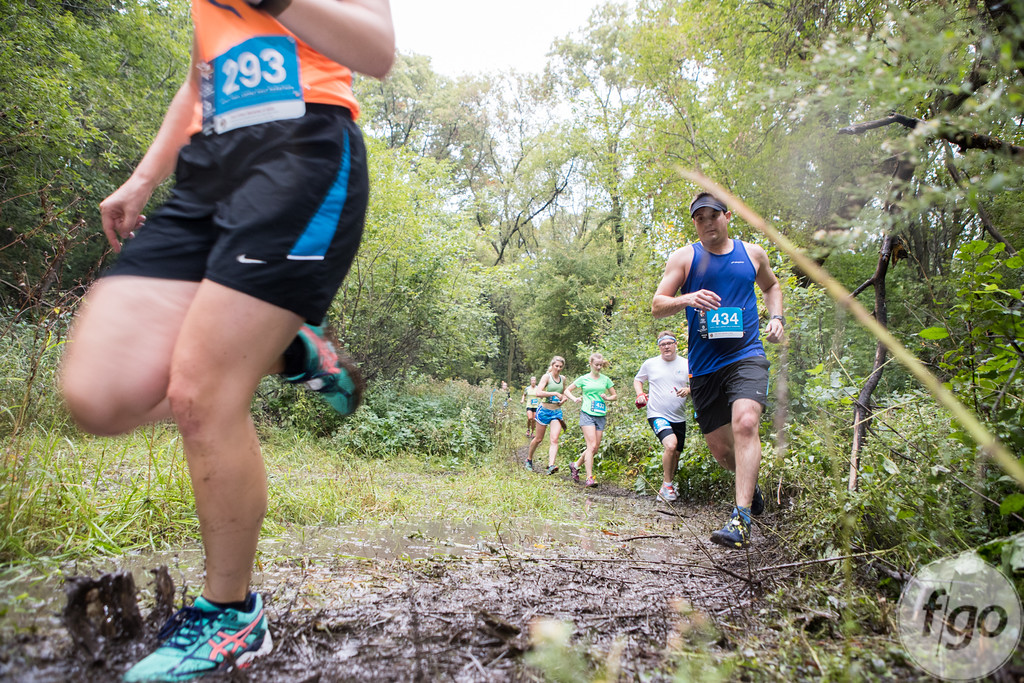 The trails were muddy and sloppy, but that didn’t slow runners down for the 11th Annual Surly Brewing Co. Trail Loppet.

The morning started off cool with a light mist as racers started trickling into the starting area at Wirth Beach in Theodore Wirth Park. Racers arrived by foot, bike, bus and car, and many took advantage of the free bike corral. 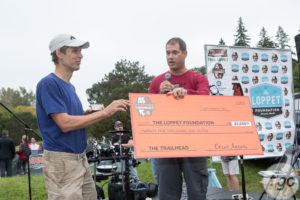 Temperatures stayed cool and the wind picked up a little as racers took off from the starting line. Right off the bat, racers got wet and muddy as they stomped through puddles and traversed the many hills of Theodore Wirth Park. The course wound through hidden trails and racers explored the ponds, lake, and bogs and that make the park feel like such wild area in the heart of the city. (Some racers even saw a deer!)  Overall, the wet and muddy course was embraced by runners and the challenging conditions made the Surly beer at the finish taste even better!

Omar Ansari from Surly Brewing Co. kicked off the Awards Ceremony with the presentation of a $25,000 check to the Loppet Foundation for the Trailhead campaign. The crowd celebrated with a special toast to Surly and to the Trailhead project. To learn more about the Trailhead and offer your support to the project, visit: loppet.org/trailhead.

Nelson commented after the race, saying that she loved the support and positive vibe that she noticed this year. She said that she realized during the race that, “running is so much more than an individual sport. It’s all made possible by the awesome volunteers, spectators and the Loppet Foundation who put in the time to make it a great event.”

When asked about the course, one finisher said that, “fancy footwork came in handy while trying not to fall on a muddy singletrack downhill.” A second-time finisher said that it was his first time running a half marathon where he finished with about 20 pounds of mud on his shoes and two bee stings!

Overall, there were 630 finishers in the half marathon. 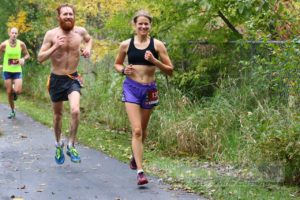 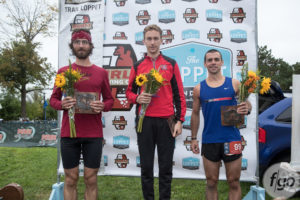 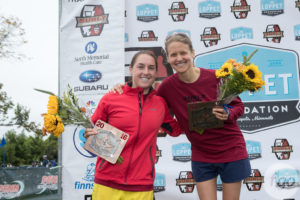 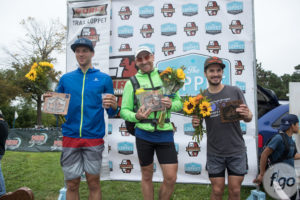 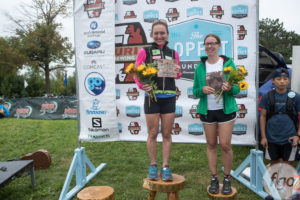 In the Age Gap Relay, adults and youth (there must be 10 year age gap between them) compete in the relay adventure run on the course, which in Loppet terms means that runners had to hurdle over hay bales!

The adults started off the relay race with 1K lap, followed by the youth. Both the adults and the kids did two laps each. The kids got to finish down a shoot walled with their parents, relay partners and onlookers cheering them on as they crossed the finish line.

This year there was a tie for first place! The teams made up of Corey and Logan Drevlow, and Sheila Eldred and Wes Sumner, both took the win. Finishing just behind them in second was Janine Sieja and Eyob Yore. And the third place team was Todd and Andrew DeFor. 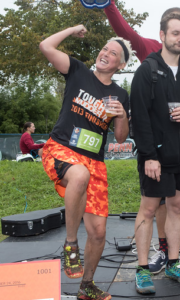 A Surly Brewing Co. tradition at the Trail Loppet is to award the Surly-est racer who gets the most banged up on the course. That racer is crowned the Surly-est Runner during the award ceremony and receives two free tickets to the sold-out SurlyFest, which happens on the same day as the Surly Trail Loppet. A few contenders were in the running this year with bee stings, and muddy battle wounds, but the award went to Tam Friestad, the crowd favorite, who came across the finish line covered in burrs and mud, and she also was stung by a bee.

There are many things that we can attribute a great race to, but above all we have to say thank you the volunteers who give up their time and talents to make it all happen! Over one hundred volunteers came out to help on race day, which is a tremendous showing.

Another big ‘thank you’ goes out to you — the racers — for the fantastic turnout and support at this year’s 11th Annual Surly Brewing Co. Trail Loppet. And, thank you to all of our sponsors for their continued support – 1-800-Got-Junk, Bachman’s, Bearskin Lodge, North Memorial Health Care, Columbia, Comcast, f/go, Gear West, GO 96.3, Great Harvest Bread Company, Hoigaard’s, Penn Cycle & Fitness, Salomon, Subaru, and of course, Surly Brewing Co.