The morning started off beautifully with temperatures in the low 60s as mist rose off the water at Wirth Beach in Theodore Wirth Park. Racers arrived to the event by foot, bike, bus and car, many of whom took advantage of the free bike corral presented by Penn Cycle.

Temperatures quickly rose as racers were starting on course with sunny September skies and temps in the mid to low 70s. Racers explored Theodore Wirth Park’s hidden trails, ponds, lake, bogs and wildflower gardens – and occasional dramatic views of the downtown skyline. Overall the course was in great shape and well marked. After the race, happy finishers celebrated with live music while visiting with vendors, drinking a Surly beer and eating a brat. 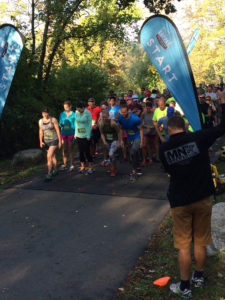 For men, Justin Grunewald, 29, of Minneapolis took the top spot in 1:21:40. Grunewald is a first time Trail Loppet participant and a member of the club team at Run N Fun. Close behind Grunewald were Ryan Tholen and Erik Fagerstrom, both 24 and from Minneapolis with times of 1:21:49 and 1:21:55 respectively. These times were six minutes faster than last year’s top finishers. Tholen is a member of the Twin Cities Track Club and Fagerstrom is a Loppet Nordic Racing (LNR) coach who came up through the LNR training program.

In the women’s category, Jillian Tholen, 27, of Minneapolis took first with a time of 1:33:16. Jillian is a team member of Mill City Running and came in 15th overall in the half-marathon with a time two minutes faster than last year’s women’s winner. Loppet racing veteran, Josie Nelson, 37, of Medicine Lake finished in second with a time of 1:39:19, and Erica Wagner, 24, of Bloomington rounded out the top three with a time of 1:44:19.

Nelson loved this year’s race saying that the “weather was perfect!” She went on to say, “what race in the city do I get to finish with three burs stuck in my hair?!”

When asked about the course, one new finisher to the Surly Trail Loppet said that “the narrow single track was challenging with its sharp turns and the hills were tough.” Another new participant to the half-marathon was pleasantly surprised about the “great wooded trails right in the heart of the city!”

Overall, there were 639 finishers in the half marathon. 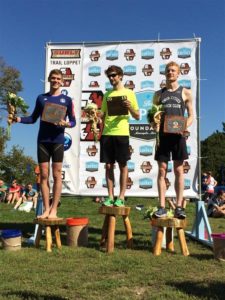 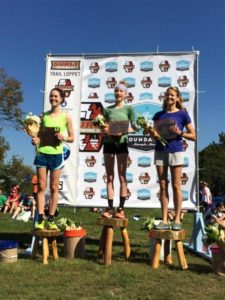 The race was very tight for the top three men in the 13.1K, with only five seconds separating them. Ben Janke, 34, of Saint Paul came out on top with a time of 53:10. Michael Moulsoff, 52, of Saint Paul finished close behind at 53:13 while 46-year-old Drake Lightner, also of Saint Paul, rounded out the top three at 53:15. 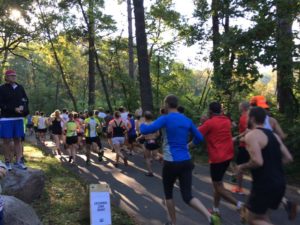 In the women’s 5K, Susie Kelleher, 48, of Brooklyn Park finished with a time of 22:12, one minute ahead of second place finisher Tracey Souvignier, 38, of Minnetonka who came in at 23:12. Ashlea Peter, 27, of Minneapolis finished the race in third place with a time of 23:59. 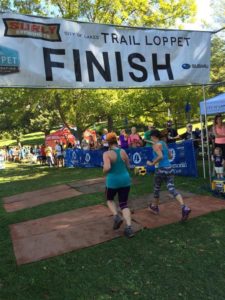 In the Age Gap Relay, adults and youth (there must be 10 years between them) compete in the relay, which for the Trail Loppet was an adventure run, which in Loppet-speak means that there were hay bales to hurdle!

The adults started off the relay race with 1K lap, followed by the youth. Both the adults and the kids did two laps each. The kids got to finish down a shoot walled with their parents, relay partners and onlookers cheering them on as they crossed the finish line.

The first place relay team was Michael Burgdorf and Zavunjae Cook. The second place relay made up by Steve and Eyob Yore finished just one second later. Finishing in third were Corey and Sydney Drevlow. 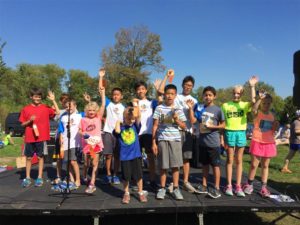 A Surly Brewing Co. tradition at the Trail Loppet event is awarding a prize for the racer who gets the most banged up on the course. That racer is crowned Surliest Runner during the award ceremony and receives two free tickets to the sold-out SurlyFest, which happens on the same day as the Surly Trail Loppet. A few contenders were in the running this year with bloody toes and twisted ankles, but the award for Surliest Runner went to a crowd favorite who blamed his cuts, bruises and bandages on clumsiness of old age. 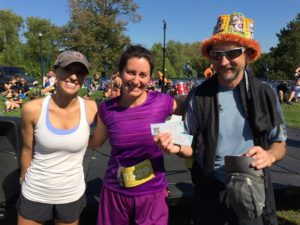 There are many things that we can attribute a great race to: great course, great weather, great beer. But we at the Loppet can never say enough great things about the work of the volunteers behind our events. Over one hundred volunteers came out to help on race day, which is a tremendous showing. Volunteer Coordinator Nancy Nelson remarked that all of the volunteers were just “awesome!” 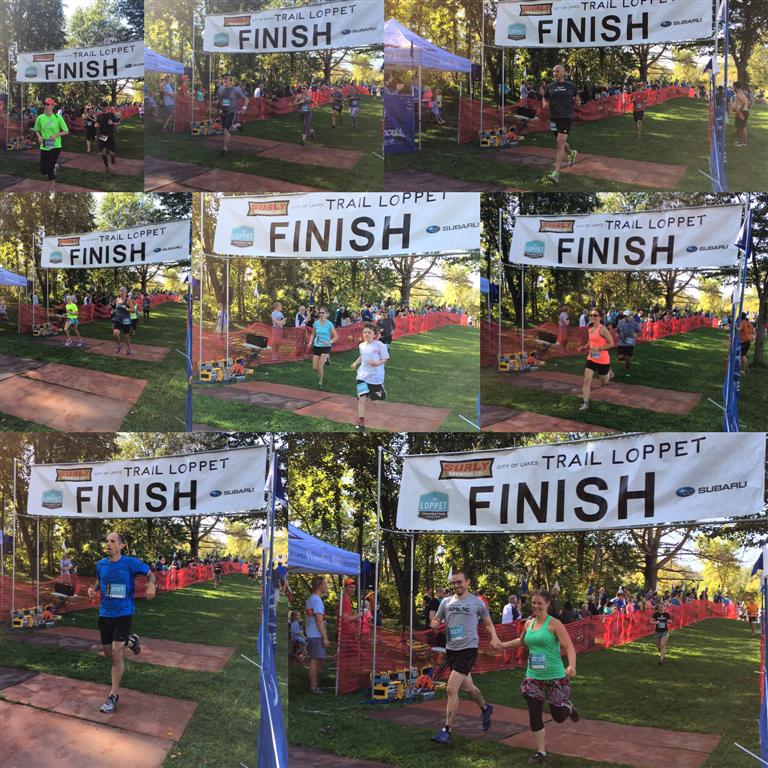