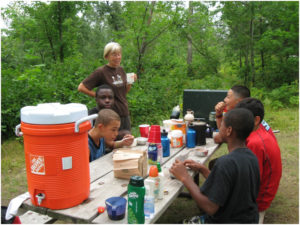 So on August 18 we held our end-of-summer training camp with the team. This camp had two parts. First, from Monday through Thursday Nellie Stone Johnson team members worked out for three hours each morning – running, biking and rollerskiing with the FAST KIDS program. FAST KIDS is a Loppet Foundation program through Loppet Nordic Racing that brings together some of the best ski racers under 13 from around the Metro Area. As such the Nellie Stone Johnson athletes had a chance to learn the types of training and paces they need to compete with the best athletes in the region. But there were also opportunities for the unique talents of the Nellie Stone Johnson skiers to shine. All of the coaches and FAST KIDS athletes were impressed to watch Li’Tavius Munn jump and spin a 360 on his rollerskis.

On Thursday afternoon the second part of the summer training camp began as Coach Jon and Coach Andrew brought six of the athletes – Bryce Holt, Melvin Russell, Li’Tavius Munn, Cesar Vasquez, Donovan Blatcher and Jeremy Vara-Barreto – to St. Croix State Park near Pine City, Minn. for a two-night camping and training trip. On Thursday evening the group rode bikes on the Matthew Lourey State trail, a strength-building exercise through the sandy trails of Pine County. One of the key successes of the camp, and of our efforts for the past few months, has been getting the kids to go to bed earlier and to eat three consistent meals. This camping trip marked the first time on any of our trips that we have been able to get the entire team to sleep by midnight on the exciting first night of the trip. 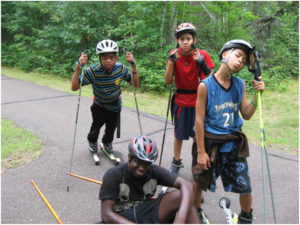 Coach Mom arrived at 8 a.m. on Friday with a latecomer – Damarion Turner – as the team was up and eating a breakfast of pancakes inexpertly cooked on flaking no-stick pans by Coach Jon. Friday’s morning activity was canoeing, which admittedly could have gone better. The first two hours in the boat, most of which was spent going upstream, the crew travelled a distance of less than a mile and had one boat tip causing us to lose some shoes and fishing tackle.

Thankfully, the afternoon activity went much better. The athletes and coaches rode bikes for 2 hours 15 minutes from the campsite to the end of the Lourey Trail at Highway 48. Coach Mom took them from there into Danbury, Wisc. to celebrate the long workout with ice cream.

Saturday morning as the rest of the people in the campground were just starting their weekend, the Nellie Stone Johnson Team was packing up, taking a final hour-long rollerski and hike and a final swim in the St. Croix before heading back to the cities to get ready for school to start. 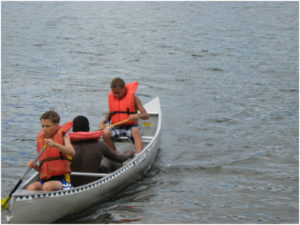 This solid week of training has shown the coaches that the Nellie Stone Johnson Team is solidly building a culture of outdoor sports and activity at the school and that the team is ready to move from building participation among students at Nellie Stone Johnson to building the next pillar of the long-term culture of outdoor sports – real success that is based on all the habits needed to pursue a healthy lifestyle: exercise and good training, sleeping well, eating right and keeping up with school work.

We look forward to a great year with the Nellie Stone Johnson team.