The middle school teams are in full swing, particularly with all of the early snow. Here are some updates from the school-based programs:

Anwatin Middle School: Most of the kids practicing in the fall tried out for the ski team and ended up on the final roster. Allie noted that this year the decisions were clear cut. The team includes about 24 students (a few above the 20 we aim for) and is made up of two eighth graders with the balance evenly split between sixth and seventh graders. While there were a few new participants who were a bit hesitant about winter, by late December, the group was already acting like a team with everyone getting along and enjoying the experience. Twelve of the Anwatin athletes came to Loppet Ski Camp and had a great time. Thanks to the Medica Foundation for its support of the Anwatin Middle School Team. 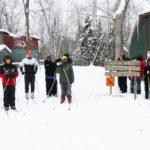 Nellie Stone Johnson: The Nellie Stone Johnson team has been having a great year. In mid-December a group of the kids headed up to Rainbow Resort in northwestern Minnesota, near the Headwaters of the Mississippi River. The skiers enjoyed plenty of fresh air and great workouts on the Rainbow 23K Trail System. Several of the NSJ athletes also attended Loppet Ski Camp and enjoyed the experience. Thanks to the Huelsmann Family Foundation for its support of the Nellie Stone Johnson Team.

Northeast Middle School: UCare generously stepped in this fall and provided an opportunity for us to create a new year-round ski and bike team at Northeast Middle School. Our initial outreach to the school garnered 140 signatures of interest! Given the timing of the fall and the already-set-in-stone busing schedule, many of the kids weren’t able to join without a ride home. There’s hope that with the new semester the busing schedule can be adjusted and more kids can join the 10 kids who consistently are showing up for practice. Anwatin Coach Allie Rykken and NSJ Coach Jon Miller noted that having 10 kids coming for the initial weeks is a great start! Northeast Coach Kelly Underkofler is excited to be working with the kids.

Middle School Invitational: All of the middle school programs are joining together for a middle school ski-cross sprints tournament invitational on February 12. All of the school- and park-based Loppet middle school teams will participate as well as four-to-six other local schools including Robbinsdale-Armstrong, Robbinsdale-Cooper, Edina, and Roseville, among others. This will provide a great opportunity for the students to compete against their peers.