The Loppet Foundation :: News & Stories :: Cold not too much for Loppet Ski Campers

Cold not too much for Loppet Ski Campers

“This was the best adventure camp yet! Winter or summer!” Coach and Adventure Camp Director Allie Rykken exclaimed when describing last week’s camp. I guess third time’s a charm! (Allie took over in 2011.)

Given the bitter cold temperatures, Allie came up with inside activities from 9 – 11 a.m. so the young campers wouldn’t need to go outside until it was at least -5 degrees. But at 10 a.m. they were ready to get outside and go skiing, particularly the older kids. So they all bundled up and got outside, staying close to Theodore Wirth Chalet. The younger kids saw the older ones outside and clamored to go out, too. Because it wasn’t windy all week and they were dressed appropriately they were just fine with the cold temperatures. Plus, the sun was shining on Tuesday and Thursday.

Allie, who coaches the Anwatin Middle School Ski & Bike Team, was worried that the new athletes on her team would hate skiing forever given th

at their initial skiing experience was taking place during bitter cold days. But they all had a great time and got along well – there was a strong sense of camaraderie and good bonding that came out of toughing out the weather together.

There were about 50 campers in total and 12 counselors, many of whom were counselors at past Loppet Adventure or Ski Camps and were college students on winter break. All of the counselors were really great, according to Allie, and they were enthusiastic with the kids and genuinely enjoyed being with them. Many of them had skied here for high school or college so they know Theodore Wirth Park very well.

The highlight of the week was a “venture ski” where the counselors had a bonfire waiting for the campers with s’mores, sweet potato packages, and hot chocolate. The kids enjoyed the opportunity to venture further into the park than they had on previous days.

Allie had organized all of the kids into different groups but some of the groups thought Allie’s names were lame so they came up with their own group names. Among the more creative were the Hobbits and the Fire-breathing Rubber Duckies of Doom. Each of the groups were organized with colorful hats so Allie could see them all at a glance. 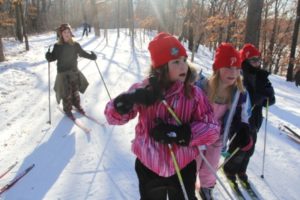 On Tuesday, a photographer from the Star Tribune came to take a picture of the ski camp. One of the Hobbits – a 7-year-old old boy named Luke – was falling down a hill. His boot was off because he hadn’t tightened it enough and a struggle fest ensued between Luke and his boot. The photographer was convinced Luke was done for the day. But Luke prevailed over the boot and much to the photographer’s dismay was out there skiing when he saw the little Hobbit later.