On Wednesday, December 4, David Bryan, the volunteer leader of the Luminary Loppet, accepted a “Great Places” award on behalf of the Loppet Foundation. The inaugural award from the Sensible Land Use Coalition celebrates great places in the region and aims to foster their further development. Of the 32 nominations from throughout the Twin Cities, the Luminary Loppet was one of six winners and received the award at a reception that featured Mayors R.T. Rybak and Chris Coleman. Hal Galvin, Kathy Loeffler, John Munger, and Kristen Spargo were there to cheer on David as he represented the team.

The Luminary Loppet crew first heard of the award through our partner at the Minneapolis Park and Recreation Board, Bruce Chamberlain, who encouraged the Loppet Foundation to apply. After some back-and-forth on whether the Luminary Loppet qualified given its temporary nature, the team met to start the application on August 29, only three weeks into Kristen Spargo’s tenure as the new advancement director at the Foundation. Thankfully she had a jump-start to learning more about the Luminary Loppet after she and David met for the first time the week before.

Kathy, who leads the Enchanted Forest, wrote the initial version of the application and did a masterful job highlighting the Enchanted Forest and setting the context for the specific place within the Luminary Loppet. Jeff added insight and information into the Inuit sculptures he creates for the event. And David provided his overall views on the Luminary Loppet and what it means for the community. Kristen then helped to pull all of the ideas together into the final piece.

“Working on this application was one of the most amazing writing experiences of my extensive communications career,” said Kristen. “Capturing the passion, commitment, and dedication of this group – and the magical event they create – was so much fun as someone new to Loppet World and challenging because I have never attended the Luminary Loppet. I felt like our application was the best writing-by-committee piece I have ever had the privilege to work on.”

Strong applications aside, the Luminary Loppet won because it is a unique, magical event that brings the community together to celebrate winter and one that the volunteer organizers have worked hard to improve upon year after year. The Great Places award honors their effort and commitment to making the Luminary Loppet what it is today. 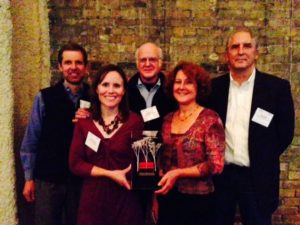