Uniquely Kubb – a fun event to toss… and toast! 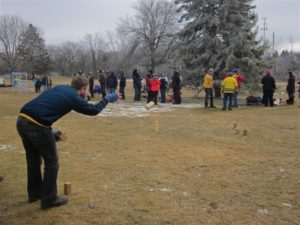 Since 2010, Minneapolis artists Roxie & Tom Lubanovic have created one-of-a-kind, handmade trophies for the City of Lakes Loppet Winter Kubb Tournament. This creative couple’s trophies reflect the unique nature of the Scandinavian lawn game and the people who love to play it.

Thanks to a successful Kickstarter campaign featuring her popular Mustache & Monster Mugs, Roxie opened Frostbeard Studios in January 2012. “I picked the name Frostbeard because it feels very Minnesotan and obviously evokes images of snow and facial hair: two things also prevalent at a winter kubb tournament” said Roxie. “Tom and I are fond of all things Scandinavian and the outdoors in general, so we’re happy to make art for this great event. The kubb trophies fit right in with our themes.”

Born on the Swedish island of Gotland, kubb has rapidly expanded throughout the midwest. Summer tournaments are held in Iowa, Wisconsin and Illinois, but Minnesota holds the distinction of hosting the only open winter tournament for the third year running. One needn’t look far at a kubb tournament to see the Scandinavian influence; It’s not uncommon to see players camped out between matches under Swedish flags wearing shirts referencing lefse or lutefisk.

Frostbeard co-founder Tom Lubanovic says he was mindful of the sport’s history from the beginning. “The trophies we’ve created are all essentially the same idea: a victorious Swedish king in traditional primary colors. This design is a very clever reference to the King Kubb and the Swedish origin of the game.” 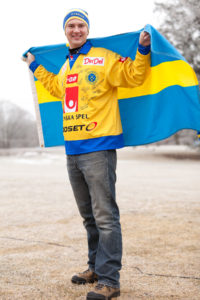 “Each tournament and each kubb community are unique, so trophies should be as well” says Eric Anderson, National Kubb Championship Director and winner of the first Frostbeard Trophy in 2011. “It says something wonderful about Tom and Roxie that they want to make trophies for a kubb tournament. A trophy with a local touch like theirs adds so much to the tournament.”

When the Loppet Kubb Tournament kicks off February 2nd on Lake Calhoun, the field will try to unseat defending champions Kubb Snipers of Appleton, Wisconsin. Team Captain Chad Bevers said of the 2012 Frostbeard Trophy, “it was totally different from the hardware awarded to winners at other tournaments. It was a nice touch and we liked it because it was unique. We can’t wait to compete for the 2013 Trophy.”

Busy filling holiday orders for, mugs, candles, and ornaments, Tom took a moment to preview the eagerly anticipated 2013 Frostbeard Loppet Kubb Trophy: “We’re making a slightly different, but still awesome trophy this year! Roxie and I are collaborating on something special.”

Registration for the 2013 Loppet Kubb Tournament is open until January 31st, 2013. Details can be found at MinnesotaKubb.com