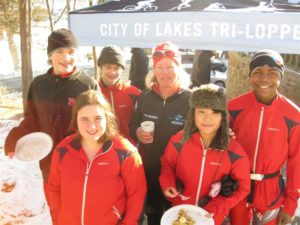 “Did you run here?” a surprised Minneapolis ski coach asked Joe Clifton as he trotted up to the Wirth Chalet for at 4pm for his afternoon ski practice. Joe was in a t-shirt and had just run from school to practice as a warm up before snapping into his skis. His younger brother Andrew, a freshman on the team, was close at his heels, and a few of his teammates arrived moments later via the city bus.

The United States was never known for it’s skiing calvary, however the Patriots at Patrick Henry High School are forming their own battalion on snow. Three years ago Clifton was the only skier at the school. Now he is a member of a team; eight athletes, one coach, and the beginning of a new skiing tradition at the school. “These kids are working really hard,” said coach Mary Luoma who is the first ski coach Patrick Henry has had in over ten years. Clifton is pleased with the growth of the team as well. “We can actually be competitive as a team” he said.

One of the closest Minneapolis public schools to Theodore Wirth Park, Henry skiers are no longer feeling like strangers on their home turf. With some Minneapolis high schools boasting ski teams of 100 plus participants, Henry is a small – but tight knit group. “We’re pretty close,” said Raequan Wilson who is a freshman on the team. Wilson skied with the Antwain Ski Team in middle school and trained with LNR (Loppet Nordic Racing) in the summer. He has been able to apply the experience he gained there to high school racing. “We’ve about half new and half “skiers”” he said describing the make-up of the team. “We can train with people our own level,” but added that they all help one another out.

The growth of the Henry Ski Team is largely due to cross country skiing opportunities currently being run by the Loppet Foundation in North Minneapolis elementary and middle schools. The Loppet Foundation, a non-profit organization based in Theodore Wirth Park, runs a trajectory of programming designed to introduce youth to cross country skiing and support that interest with a year round structure of outdoor activities that keep kids interested and active during all seasons. Currently the Foundation runs teams at Anwtain and Nellie Stone Johnson middle schools, and hopes to build this network to include more middle schools in the future.

Selena Philaphandeth, a ninth grader at Henry joined the team after learning how to ski in the Minne-Loppet program at Bryn Mawr. When asked what spurred her to join the Henry Ski Team, she responded, “I noticed I was wasting time sitting at home and I wanted to do something fun and worthwhile with my time”. Was she bothered by the cold? A smile emerged from deep within her hood, “I like it.” Selena’s brother is a third year skier at Anwatin Middle School. Would there be friendly competition between the two siblings in the future? Selena answered confidently, “no, I ski smoother than him.” 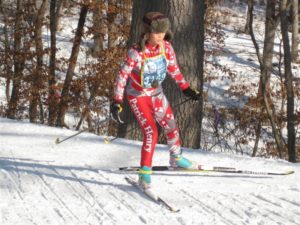 Madonna Moua is also a first year skier on the Henry team. As a ninth grader she decided to join the team at the recommendation of one of her teachers. “I don’t like sports like basketball, I don’t like to feel “smashed” upon,” she chuckled. Moua would never have imagined herself on snow, let alone loving it. “I love climbing to the top of the hills and I feel so warm” she added checking her cheeks with her hands. “I don’t get cold.”

While Patrick Henry welcomes new skiers – it is the determination of its experienced athletes that will make the team competitive in Minneapolis. In the City Conference Grade Level classic race, Joe Clifton placed 12th overall, Mike Xiong was 3rd for the 10th graders, and Raequan was 1st for 9th graders. Andrew Clifton and Teagan Brogdon were 3rd and 4th respectively. Coach Mary Luoma, who was an assistant coach on the Anwatin Ski Team for several years, has witnessed the growth of many of the Henry skiers as athletes and individuals. “I have been thrilled to see the team camaraderie and excitement for races. Raequan and Mike have developed a strong friendship that started in middle school. In high school I have seen them become more responsible, and concerned about how they are doing academically.” She hopes the Henry team begins a tradition of both strong racers and lifelong skiers. “Teagan started to ski at Bryn Mawr with Coach Margaret (The Loppet Foundation) and then skied at Anwatin. He loved being outside, but wasn’t that into racing. This year he has remarked that the races are awesome… he can’t get enough skiing!”

Like most ski teams, the group trains hard and then enjoys the reward skiers like the most: food. This past weekend, the team joined other members of the Loppet ski community for the Waffle Loppet – a morning ski with waffles to follow.

Fueled by a love for skiing (and a waffle here and there), this team is forming a tight bond on the trails. Watch the Henry skiers as they participate in the City Conference Championships, Jan. 30 – Wirth Park