The Loppet Foundation :: News & Stories :: Running and rolling… all for an Iron Pig

Running and rolling… all for an Iron Pig 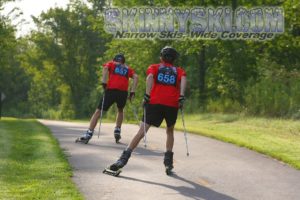 Separated by the mighty Mississippi, but united by a common love for snow – the two premier cross-country skiing training programs in the metro met in the middle of the Lake Street/ Marshall Avenue Bridge to unveil the winners of the first ever Twin Cities Club Championships. Mike Brown had tallied the results and requested a meeting on the bridge. “This way the winning team takes the IRON PIG and goes directly to their side of the river,” Brown siad as he made his way to the middle of the span.

The Twin Cities Club Championship is a two part event that begins with the Loppet Foundation’s Ringer Roll roller ski race at Baker Park, and finishes with the Battle Creek Trail Run in St. Paul. The competition is open to the public. This year, fourteen Minnesotan ski clubs were represented on the trails. Athletes of all ages and abilities could earn points for their clubs in the various age class and gender categories. And all for what? Pride of course… and an iron pig. The winning club earned the rights to house and display the hefty IRON PIG, the traveling trophy for the Twin Cities Club Championship, until the winter championships event in January – part of the Tour de Twin Cities. Not only was this event a good chance to test the powers of summer training, it was a way to get skiers involved who normally do not compete in summer dryland or roller ski events. “We had a lot of people in our club, both kids and adults who like training but were intimidated by the idea of competition. Afterwards they came back to me and said they had tons of fun,” said Sisu Foundation Director Ben Popp who foresees that participation in the event will grow.

Individuals earned points for their team based on how many people competed in their particular age category and how well they did. “The great thing about this event is that it follows the vertical model which has been used by ski clubs across the seas for quite some time. Whether you are racing as a five year old or a seventy year old – there is a place for you to earn points for your team.” Popp commented that everyone comes away from the event motivated for training. “Kids inspire adults, and adults inspire kids – that is pretty cool.” 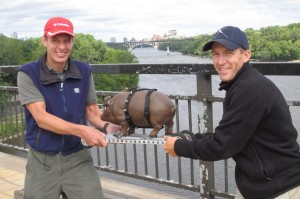 Popp and LNR Coach Reid Lutter both believe the fun and competitive aspects of this event will continue to elevate the level of skiing in their communities by spurring a healthy sense of competition among the clubs. The end result? Stronger, deeper, and enhanced skiing opportunities in the Twin Cities.

This year- LNR had the largest turnout for the two events and walked away with the Pig in tow. “Now that we’ve tested the idea, we are going to be pretty motivated for this winter when we come back and steal the pig,” chuckled Popp regarding his club’s second place finsih. Beware LNR, this is just the beginning of a long and competitive relationship. Who knows where the Iron Pig will wallow next…

To see the Iron Pig in the months to come stop by the Loppet Foundation offices in Wirth Park. After January, who knows . . .