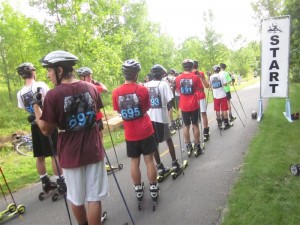 It was an early morning- but the summer skiing world is used to it. Wrapping up a season of roller skiing was the twelfth annual Ringer Roll in Baker Park. This Roller Ski Race, created to honor of late Twin Cities area ski coach Chris Ringsven, is a chance for athletes to see all their sweaty mornings and summer miles at work. “They put a lot of miles over the course of the summer, and it’s nice for them to see it pay off in a timed event,” said LNR Head Coach Piotr Bednarski who also raced.

Being released two by two out of the starting gates, the athletes powered down in their poles and helmets. The men’s race began at 8 a.m. followed by the women. Athletes competed in three different roller ski categories: Marwee Skate, Marwee Combi, and other. Participants had the choice to skate or classic. 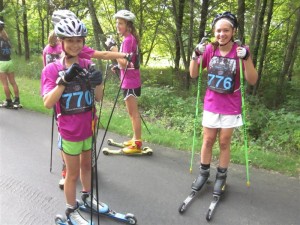 For many it was their first roller ski race. “This is one of the only events like its kind here (Metro Area),” said Marc Beitz who coaches both youth and adults in LNR programs. “In Europe they have race weeks when the best athletes come together for rollerski races, sprints, trail running and mountain biking. You can see by the popularity of this event, that there is a lot of room for events like this to grow.”

Reid Lutter, founder of the event and LNR Coach, said he created the event years ago after the unexpected death of his longtime friend and fellow skier Chris Ringsven. At the awards ceremony, Reid honored Ringsven’s parents who were in attendance, and shared Ringsven’s enthusiasm for coaching and outdoor sports. Lutter described how the unexpected death of his friend left him with a deep sense of loss. “So often we forget to let the people we appreciate know how much we care about them… Take a moment to let your friends know how important they are to you,” Lutter encouraged the group. 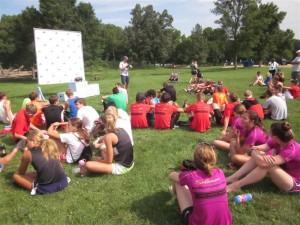 Between rewarding the hard work of the summer months and celebrating the community and camaraderie that accompanies training, the Ringer Roll is only slated to grow. The Ringer Roll had nearly 150 participants this year – who had no trouble putting down the 15 watermelon at the finish. The event ended with Lutter calling up winners to accept the hefty “Iron Pig”, a hefty traveling trophy which will reside with the Ski Club that dominates this two part event. Athletes will meet next week for a trail run at Battle Creek to wrap up competition.