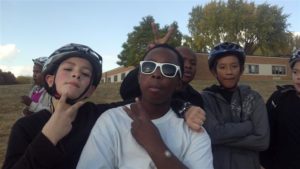 Most skiers woke on Thursday morning to the delight of December’s first snowfall. What most would view as a far cry from skiable, most Twin City skiers read the dusting as Mother Nature’s promise of the impending winter months to come. However, that was not what Coach Jon Miller saw. “Oh- we’re skiing today for sure,” announced Miller early in the afternoon. With the fresh downy white barley covering the leaf littered paths, the middle school skiers from Nellie Stone Johnson Ski Team hit the trails leaving their mark, quite literally, on December 1st.. With tracks criss-crossing the tightly cropped golf course grass, the Nellie Stone Ski Team were able to work their strides and glides and herringbone near the snowboarding area of Theodore Wirth Park.

This is the first year of the Nellie Stone Johnson Ski Team, but many of the youth in the program are no strangers to the sport. Some have participated in the Loppet Elementary School Ski program and skied in the Minne-Loppet at the City of Lakes Loppet. Others have participated in the winter and summer Loppet Ski and Adventure Camps. However, for all of the participants this will be their first time training, competing in uniforms and being part of a team. About 20 youth participate in this new program. 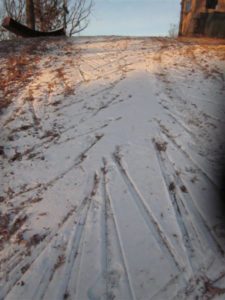 Keeping kids enthusiastic through the dryland season has been a challenge for Miller, who himself has spent most of his live on skis and competed for Gustavus Adolphus College. Most cross-country ski exercises like bounding and pole hiking are new to the kids’ playful repertoire. “They have no concept of dryland,” said Miller who has had to think creatively to retain the participant’s enthusiasm before hitting snow. “An adult program does not work for kids. You have to trick them into doing stuff that you want them to do.” Miller usually sticks to two drills before incorporating a fun game like one-legged tag, a team favorite. On several occasions, Miller was able to bring the team, who usually practices on school grounds, to Wirth to use the Foundation’s fleet of mountain bikes, providing some unforgettable forays into the forest. 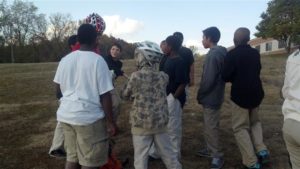 Miller has coached on all levels with the Nordic Ski Foundation including the adult and elementary school programs, but believes the middle school is both “the most challenging and the most fulfilling” age group to work with. “I like coaching kids because one of the participants in this program could be a future Olympian, and that’s exciting. When you coach an adult, that’s just not going to happen.” Now, with both coach and kid appetites whetted by the season’s first ski, the Nellie Stone Johnson Ski Team may find it hard to lace up the sneakers once again. “They did a great job,” Miller affirmed at the end of the workout. Watch for the Nellie Stone skiers in the winter months to come…