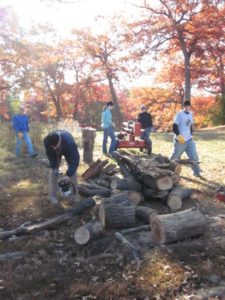 Nearly 200 people converged in the Theodore Wirth Park parking lot on Saturday October 29th. With a glowing sun melting the frost away, old and new faces from the Loppet community showed up with loppers, saws, buckets and shears to spend a morning tending to the forest and preparing the ski trail surface for snow. “Trails Day happens once a year, and it is when we get most of the work done for the season,” remarked Chief of Course Craig Rudd who organized the event. “It is a very important day. We reseed, clear debris and buckthorn from the sides of the trail, split firewood for winter fire pits and patch sections of the course succumbing to erosion.”

As volunteers arrived, Rudd directed them to various team leaders who disseminated with their crews into the forest. Numbering 10 to 40 per group, the teams were spread throughout the park touching all aspects of the ski trails: Eloise Butler, the Bog, the stadium area, Cedar Lake Trail and the Back 40 all received some form TLC throughout the day. “The trail is hardly recognizable without the snow,” laughed a long time skier who found herself turned around in the fall leaf foliage. 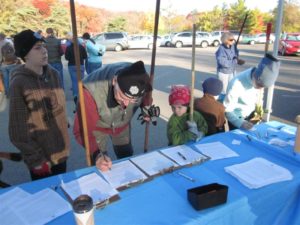 REI and the Nordic Ski Foundation have been partnering for Trails Day for the last several years. The event was advertized through both the REI and the Nordic Ski Foundation websites and participants were asked to register online. Enthusiasm for the event was overwhelming and REI Outreach Specialist Mikaela Kramer said she had to open up registration twice during the final week to accommodate all the interest. Volunteers who have spent years on the trails joined others who are new to ice and cold. Mary Moreira shared how she used to come to Wirth to downhill ski over 40 years ago with new volunteer Cynthia Bond, a Missouri native, who admitted that she had “never been on a frozen lake before.” Volunteers were rewarded for their hard work with pizza and T-shirts REI provided for the day.

With a mountain of work completed by noon, volunteers kicked off their weekends with accomplishing a mountain of work. “I’ll never look at this spot on the trail the same again,” remarked one volunteer as he described the effort it took his group to remove a stump from the trail. “I will always round this corner with the new appreciation for the trail.” Nordic Ski Foundation Director John Munger was thrilled with the turnout. “When you just see the white carpets of snow, it’s easy to overlook what it takes to maintain these trails throughout the year. Trails Day is a fantastic opportunity to take part in the process that makes these trails so great and do so with other like minded folks. The work done here today ensures the longevity of these trails for years to come.”