The Loppet Foundation :: News & Stories :: Surly Under the Burly Oaks

Surly Under the Burly Oaks 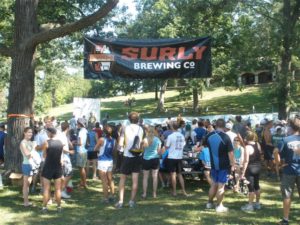 As of 5:00 p.m. Thursday evening, the Surly Brewing Co. banner was waving bold and strong over the empty finish line that would be bustling with racers Saturday morning.  After fiddling around with snow fencing for much of the afternoon, the finish line set-up crew were presented with one last riddle for the day: how to string a Surly Banner across the sky (well, at least 20 feet off the ground) without amenities like ladders, bows and arrows or cranes, and only two trees to speak of.  Undaunted by their mission, Greg Klave,  Allie Rykken and Dan Luoma got to work Boundary Waters style.  “How to hang a bear pack” became “how to hang a Surly Banner”.  The two endeavors turned out to be strangely similar.  Both are survival missions, and require a fair amount of aim and ingenuity and spirit to  pull off properly.

Tying together scraps of rope, the team made a lanyard long enough to span the space between the trees.  Trying sticks, stones, and ultimately settling on a water bottle, Dan threw a winning toss over one branch.  But when he tried to make it a double over the other side, he got the water bottle stuck dangling well beyond his reach.  “We’ve come so far.  I’m committed,” he said.   But the team continued to struggle.  They tried to reach with the ends of the finish line flags but to no avail.  Then a thought dawned on Dan, “Let me see what junk I have in my truck.”  He returned a moment later with gleaming eyes and success already won… ski poles.  Hopping on top of a picnic tables, he stretched the ski pole to the sky, and using the loop at the top, grabbed the water bottle and was able to pull the chord to the ground.

“Hurraah!” The team cried.  Gregg went to the tree and pulled the rope tight on the opposite end lifting the banner higher still.  Allie gave her approval viewing the banner from a far and the comrades made their final knots.  Dan stepped back from his work chucking under his breath, “ski poles save the day.”  Gregg, who was already smiling looking at the sight, added his own poetry to the moment, “Surly under the burly oaks,” (and indeed, they were burr oaks).  His teammates nodded their heads in approval.  “Awesome,” Allie concurred, and as a dreamy after thought concluded, “I just love ski poles.”