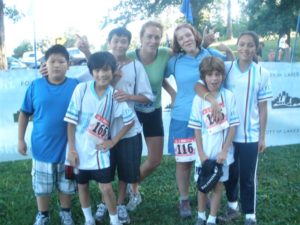 “It was awesome,” said Anwatin team member Glory Duda definitively as if she would have had it no other way.  But what hasn’t Glory been enthusiastic about this year?  Since trying out for the Anwatin Ski Team last fall, Glory more than cut her 5K ski time in half, has taken a self contained bicycle camping trip, competed in 4 mountain bike races over the course of the summer, and now just wrapped up her season with a 5K trail run, part of the City of Lakes Trail Loppet.

She was one of the five lasting members of the Anwatin Ski Team to make it through each of the three of the City of Lakes Loppet events: The City of Lakes Loppet (cross-country skiing), the Tri- Loppet (a paddle to a trail run to a mountain bike ride), and the Trail Loppet (a 5K run on the trails of Theodore Wirth Park).  Mike and Muaj Xiong, Saysetha Philaphandeth, and Adia Froehle-Baker joined Glory in completing all three events.  Only a handful of women and men participate in all three events- so the fact that these athletes were training and competing at such a young age was quite an accomplishment.

These diehard athletes are known not only for enthusiastically and skillfully embarking on the trail, but for their energy and willingness to help clean up after the events.  “You should have seen them biking the 21/2 and 5 gallons of water on their bikes when we were cleaning up after the Tri-Loppet.  These are some great kids,” complimented director John Munger.

On Saturday, the Anwatin Ski team arrived at the starting gates sporting their summer mountain bike jerseys.  Despite being among the youngest to participate, they did not show any jitters, nor were they strangers to the trail.  With their school resting on the edge of the park, the Anwatin Ski team members are at home on the winding and tangled paths of Wirth.  “They have probably spent more time in Eloise than any of the racers today,” thought Ingrid Remak who has been coaching the Anwatin team for the past several weeks.

Over the course of the last 11 months, the ski team has traipsed through the woods in snow, sun, rain and slush.  They have tried a smorgasbord of activities in the forest and been privy to the various sights and sounds of the woods as the season change.  With the final Loppet challenge now behind them, the Anwatin Ski team is looking forward to getting back on the snow.  “I just want to ski again,” said Muaj.  And he won’t have too wait long.  The Anwatin Ski Team tryouts will be held after school starting at the end of October, with snow scheduled soon after that (hopefully…).

As the team came together for their last summer practice of the season they put their hands together, and in true skier fashion, cried out on three, “Think snow!”  With all the power the Anwatin Ski team can muster up, we shouldn’t have to wait for snow for long…

Until then, some of the Anwatin skiers will have the opportunity to do some mountain biking on their own.  As a member of the Anwatin Ski team, if you attended 19 or more practices or races over the course of the summer, you would receive a mountain bike from the Nordic Ski Foundation.  A workshop on bike care will take place in the following weeks for the kids who earned a bicycle.