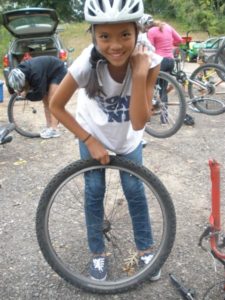 “I’m going to start riding to school” exclaimed Saysetha as he snapped on his helmet and bounded back to his bicycle that he had been working on for the last half hour.  That is because the ten mountain bikes that the Anwatin Ski Team had been riding throughout the summer were going home with the athletes… for good.

Early on in the summer, Coach John Swain planted a seed in the hearts of the Anwatin Ski Team that stuck with them throughout the season.  As a member of the Anwatin Ski Team, athletes would have the opportunity to earn a mountain bike if they consistently came to practice and competed in races over the course of the summer.  From June through September, the Anwatin Ski Team met twice a week at Wirth for mountain biking, roller skiing and trail running practices.  Additionally, the team competed in four mountain bike races part of the Minnesota Mountain Bike Series, the Tri-Loppet, the Trail Loppet, and attended the Loppet Adventure Camps in Theodore Wirth Park. 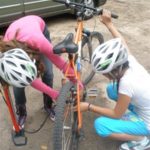 With the summer season drawing to a close with the Trail Loppet taking place last week, athletes finished the challenging run with the words of Coach John ringing in their ears, and just one thing on their minds: mountain bikes.  “They asked me if they could go mountain biking as soon as they finished the trail run.” remarked Coach Ingrid.  “I constantly marvel at their enthusiasm.  In rain, bugs, sun – the kids just want to ride.  And now they will have the opportunity to do so whenever they want.”

Yesterday, the Anwatin Ski Team returned to Wirth to be reunited with their bicycles.  With additional coaches and volunteers on hand to make sure the bikes were in tip top shape, the athletes were guided through basic bike mechanic skills like changing a flat, unhooking the brake, re-attaching the wheel and cleaning a chain.  After an hour and a half of getting their hands dirty, the athletes were ready to ride home. 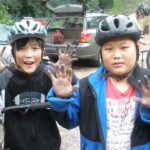 “So many of these kids live on the banks of WirthPark and are in a perfect position to take advantage of the trails.  They love mountain biking and they are good at it.  The Nordic Ski Foundation’s mission is to foster a passion for outdoor activities.  Providing these kids with bicycles that they will use to access the trails on their own is a huge step into empowering them as lifetime athletes,” said Nordic Ski Foundation Director John Munger who lent a hand in the workshop as well.

Now the bikes that carried the athletes over rock gardens, log jams, through mass starts and up muddy climbs, were theirs to keep.  As the kids lubed their chains, you could hear them planning their bicycle caravans to school, “I’ll pick you up,” said Muaj to his friend.  Not only that, but with Wirth  in Anwatin’s back yard, access to the trails could not be easier.  “I’m going to come here after school every day,” said Raequan who said he has missed mountain biking ever since the season ended.  Rolling away with helmets and locks, you can expect to see more of Anwatin on the trails.  The team is looking forward to resuming formal training at the end of October.