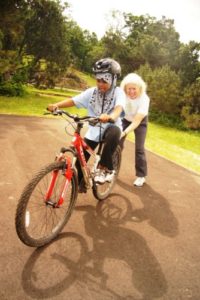 “This week we had a unique happening at Adventure Camp. An event took place that has never taken place at this summer camp before,” Loppet Program Coach John Swain announced as he paused a moment to pull a pair of unique certificates from his folder fashioned especially for this occasion. “Two of our participants, Kalid and Alam Jama, learned how to ride bicycles.” He did not have to summon the applause that followed; a mix of claps, whistles and jeers rose from the crowd of 50 kids and counselors who had seen the siblings streaked with mud throughout the weeks as they struggled to get a hold of their mountain bikes. But by day five, the brother and sister team were riding, and not looking back.

“I’m going to have to get them bicycles now,” exclaimed their father Abdirizak as he watched his children glow as their received their awards. “I grew up in Somalia where I didn’t have a bicycle. In Mogadishu you had to pay a lot to even rent one. It was too expensive.” He said that the two had come home tried but excited all week, never doubting for a second that they would not learn how to ride by Friday. “I knew that if I would just stick with it, I would learn,” Kalid said with a smile.

Most of us can remember the time in our lives when we learned to ride. Endless days of falling ultimately prevailed in speedy straight-aways and summer independence. But the actual moment of biking transformation, when kids go from scooting and swerving to zooming unencumbered through neighborhood streets, is much harder to pin point. When news filtered back to the office that two kids were at camp who didn’t know how to ride, everyone found themselves turning the gears of the bicycles of their youth. “What kind of hills did you practice on?” “They should start on grass” “Maybe we should take off their pedals so they can work on balance.” But regardless of the strategies that were debated, one item was agreed upon: there is no special formula to riding, you practice and practice until one day, biking happens. The Loppet staff received daily updates on the Jama sibling’s progress, and shared in the jubilation of their accomplishment.

Biking is not the only activity new to the Jama family since they moved to Minnesota from Somalia 17 years ago. Kalid, 11, and Alma, 9, who have lived their whole lives in this northern climate, both participated in the Nordic Ski Foundation’s Pillsbury Ski Program and have raced 3 consecutive years in the Minne-Loppet, a youth ski race which is part of the City of Lakes Loppet Cross Country Ski Festival. “We are getting exposed to Minnesota bit by bit” Abdirizak smiled as he patted his daughter’s head buried at his side. As the oldest two siblings in a family of six, Alam and Kalid have their work cut out for them instructing their siblings in their new favorite sports. Seeing his children’s accomplishments got Dad’s wheels turning as well, “I think I’d like to ride a bike now too.” I’m sure Kalid and Alam will be ready to stand at Dad’s side and help him along.