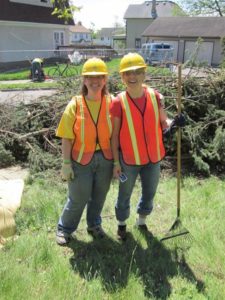 Uniting under blue skies, over 80 volunteers from the City of Lakes Nordic Ski Foundation, Nice Ride and Surly Beer Company gathered under the Loppet awning in the Theodore Wirth parking lot to take rake and shovel to the battered, tornado hit neighborhoods of North Minneapolis. Greeted by Mayor R.T. Rybak, the Mayor extended his sincere appreciation to the group and encouraged people to be mindful of the emotionally and physically exhausting weeks residents have endured. With offices in Theodore Wirth Park, the Nordic Ski Foundation encouraged everyone in its community to come out and join the relief effort. “Most of our youth programs are based in the North Minneapolis community,” said Program Director Margaret Adelsman. “Families of those kids we see in the schools were impacted by the storm, and it’s really important that we help families as best we can to return them to some semblance of normalcy.”

Whatever their motivation, volunteers drawn from the three organizations united with one common goal: to help the North Minneapolis Community. Even in the middle of the work week, volunteers and their families re-arranged their schedules in order to participate. “You see the pictures on T.V. and you want to do something, but it is so big. Where do you even get started?” expressed former North side resident and skier Jim Porath, who volunteered with his wife Karen in the afternoon. “The e-mail notice came at the perfect time. We just said we’ve gotta go do this.” Skier Meredith Schonfeld-Hicks agreed, “After a disaster you want to do something, but what? Receiving this e-mail was an invitation to do something I wanted to do. And I trusted that these organizations were in touch with what was needed on the ground.” 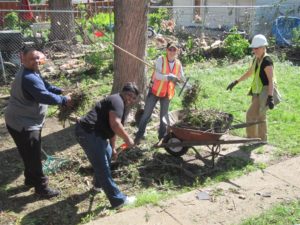 The swaying lilacs and warming sun on Thursday morning would never have indicated the ferocity of the storm that ripped through North Minneapolis on Sunday. The funnel cloud that began in Theodore Wirth Park traveled almost 3 miles through North Minneapolis shredding and uprooting thousands of trees in its path. While damage was sustained in the park, it was really the surrounding neighborhoods that were the hardest hit. “It is a given that we would take part in helping the North Minneapolis Community,” stated John Munger, director of the Nordic Ski Foundation, and organization based out of Theodore Wirth Park. “It is our community.”

Urban Homeworks, the North Minneapolis non-profit that is facilitating volunteer clean-up crews, estimated that over 3,000 people have come to the damaged neighborhoods to lend a helping hand. Despite overwhelming support, there was still lots of work to be done. Debris, downed trees and remnants of roofs, siding, porches and fences blocked sidewalks, littered yards and prevented any sort of activity in homes. For many volunteers, it was the first time seeing the aftermath of the damage first hand. Roofs had been ripped from houses, cars were pinned under trees and parts of windows and power lines remained everywhere. “Now I see why one of our students didn’t make it to school for a couple days,” said her Loppet mountain bike and ski coach John Swain. “But she still made it to practice,” he added with a chuckle. 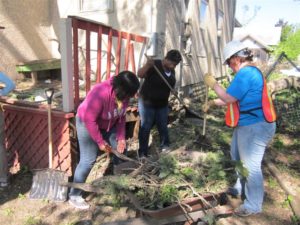 Once on site, groups were dispatched to service the various homes engaged in lugging logs, breaking branches and raking leaf litter to the curb. Groups liberated gardens buried by broken fences and picked stripped shingles from the streets. Crews combed through neighborhoods knocking on doors and asking permission from homeowners to assist them in any way, oftentimes working alongside residents as they sorted through the debris. “Our goal is to get their lawn to a state where it can be mowed” instructed Urban Homeworks Volunteer Manger Jon Lundberg.

While working on the properties, volunteers heard firsthand about the intensity of the storm. The Briggs family was cleaning up their yard when a group of volunteers joined them out back. Together they lifted the awning that had been ripped from over their back door and deposited in the back yard. Wheel barrow after wheel barrow of debris was unloaded on the over overflowing boulevard. Mrs. Briggs took a rake to the porch that had been impaled by the outdoor table; “You know, I wanted a new back deck anyway,” she said with a smile.

Volunteers were able to tackle tasks that would have been colossal for a single family. Nice Ride director Bill Dossett recalled his favorite part of the day, “It was nearing the end of our shift and we ran into this guy who needed help removing the pieces of his old roof off his house so he could build another one later that day. I called everyone together in that area and we cleared his roof in the last 40 minutes we had. He was so happy. That was awesome.” 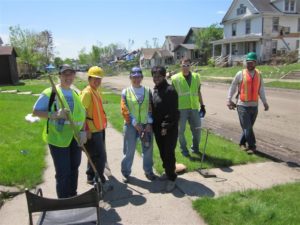 Volunteers get inspiration from the work of Mrs. Walton

Resident Twanda Garrett just shook her head saying she “never thought something like this was possible in the inner city.” She brought water out to the team of volunteers, thanking them profusely. She made it to the basement with her kids during the storm, but her husband got stuck upstairs trying to close windows. He just lay down and protected his head hoping for the best. Another group found themselves liberating a garden from a toppled brittle fence, the parsley and basil still intact.

While the initial push for volunteers comes to close, North Minneapolis residents continue to face monstrous clean-up tasks and tree stripped boulevards that will never look the same. At the end of the morning shift one group passed the nearly impeccable lawn of Pastor Gloria Walton. She said she has been cleaning up since the storm happened. “Well we can’t let this clean-up effort go on forever.” Since then her house has been without electricity and she’s been using a flashlight to pickup shards of glass out of the carpet at 2:00 a.m. Mrs. Walton laughed telling us how she brewed coffee in her panty hose to avoid leaving her property unattended. “You see so much bad news, but this is good news. The community is pulling together,” Mrs. Walton said as she led us down the street to a cook-out her neighbors had set up for volunteers and residents alike. “We need news that shows that people actually get along.”