Skiers are fond of inclement weather. They often find themselves the sole celebrants in a season of despicably cold temperatures and snow. This quality was proven true on Saturday, May 21 when, despite steady rains, a solid crew of skiing aficionados and friends joined the Nordic Ski Foundation in its first tree planting effort in Theodore Wirth Park. 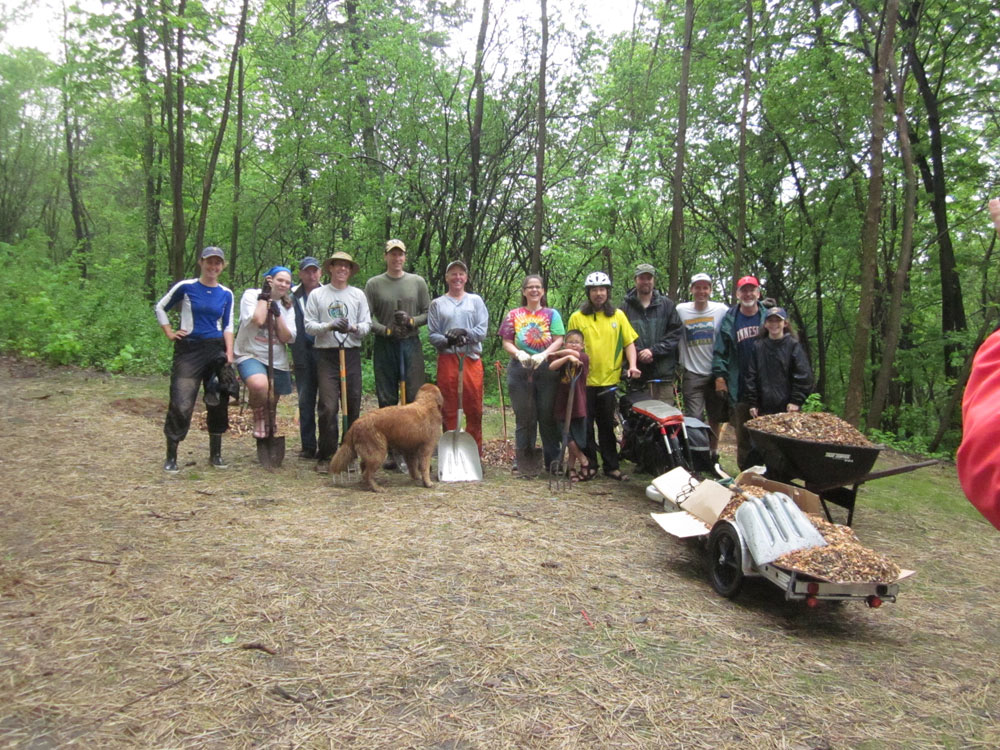 The Nordic Ski Foundation partnered with Bailey’s Tree Nursery and the Minneapolis Park Board in an effort to reforest parts of the park where the old ski trail used to exist. Putting lobster gloves aside, over 20 skiers showed up with rain gear and work gloves to plant 50 young saplings in the Eloise Butler section of the park along Gronquist Hill. The new trees were arranged south of the tennis courts and on the old Gronquist Hill that went along the rear portion of the Eloise Butler Wildflower Garden.

Coming out of one of the snowiest winters to date, Saturday’s work crew was well practiced in the art of shoveling. Applying their scooping savvy to the trails, the group planted a total of 25 birch and 25 maples. Teams distributed wheel barrows of mulch around the newly planted trees followed by other crews staking out the new saplings. Garrott Teoh, the youngest volunteer at age 8, helped load woodchips onto his
father’s bike trailer to be distributed in the forest before assuming the vital role of delivering cookies among the crew members. 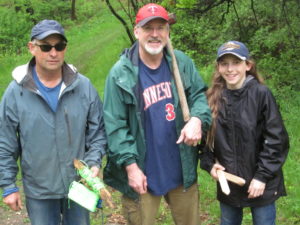 Participants laughed as they reintroduced themselves to one another on the trail free of winter garb. Finding themselves out of season and out of sorts, volunteer Heidi Teoh joked with former Trail Club coach Damon Struyk while planting, “Do you think they are going to assign us tree planting waves?” In the spring rain new friendships were forged and skiing connections made. “I even got myself a partner for the Tri-Loppet!”
exclaimed dedicated Foundation member Mary Vancura who will be participating in the Tri-Loppet for the first time this year. Among the volunteers were Loppet skiers and their families, Foundation members, Glory Duda who skis on the Anwatin Ski Team, as well as a crew of volunteers that have been shoveling (among other things) for the Loppet since it’s birth nine years ago. Longtime volunteer Bill Dossett remarked, “if you
can summon the shovel power of 50 people to schlep snow onto the Loppet race course until midnight days before the event, a couple of trees in the rain is no big deal”.

As the final wood chips were laid around the bases of the new trees, the rains resumed. Feeling muddy, wet and accomplished, the volunteers headed back to the Loppet office where warm pizzas awaited the soggy team. Swapping stories over the upcoming Tri-Loppet, mountain bike and canoe season, the group gobbled up the steaming lunch. At the end of the event the volunteers bid one another farewell in true skier fashion; wishing everyone well for the upcoming ski season. 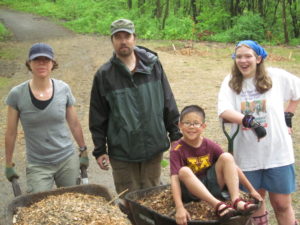